Imbalance of the five elements in the human body can cause different symptoms in accordance with characteristics or attributes inherent in that or other element, which are called Guna Dvanda (duality of attributes). Guna Dvanda was described by the ancient physician Charaka in his text "Charaka Samhita", where he had allocated 10 pairs of the mentioned attributes by which you can diagnose and treat patients (Frank Ros, 2005).

Manifested in the body "syndromes of the elements" are the signs that allow Vaidya (Ayurvedic doctor) to understand the essence of an imbalances and the root of the disease. They often appear before the disease declares itself in a loud voice, that's why study of them may become a very important part of prevention.

Characteristic of the Elements 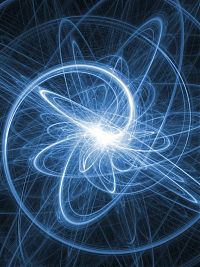 Ether (Akasha) — the space. Literally is perceived as the body cavities (e.g., in the bowel). However, the space exists not only at the level of the macroscopic bodies, but also at the cellular level. Interstitium (intercellular space) is not just a space filled with water. Intercellular matrix is composed of connective tissue fibers (like thick bush) in the cavities of which the cellular elements and free spaces are located. Part of this space is filled with tissue fluid and part remains free.

However Ether is not an emptiness, one of the translations of the root "-Kash-" from Sanskrit is "radiate". Ether is as well material, as all other elements. But this is the field form of matter that fills the space. One of the manifestations of Akasha is sound, ie fluctuations of matter. It is possible, in this way the ancient sages designated, what we call the electromagnetic spectrum with varying frequency oscillations.

Now it's no secret that the space around us is not an emptiness, but the complex environment filled with radio frequencies, light radiation, cosmic radiation, etc. And this space affects us, although at once we can not realize this.

Cells are the powerful source of electromagnetic radiation and oxidation processes in them are the constant source of free photons (light). All these tell us that the nanoworld around the cells is not just an empty space, but the information-rich "world" in which cells exchange "data" not only through the material substrates (hormones and neurotransmitters), but also through "field interaction".

One of the main features of Akasha Bhuta is cold. The more space, the more cold. The aging process is characterized by a gradual loss of Avalambaka Kapha - the moisture between cells, herewith the connective tissue matrix is restructured with the forming of mikrospaces (sclerosis). At the same time the density of matter is reduced (osteoporosis), this increases the distance in between the manifested matter. In the body, the proportion of Ether increases, herewith older people feel chilly.

Since the main source of heat in the body is warm of blood, and this heat can be easily transmitted through the fluids, but not through the spaces, thermo regulation of tissues changes. Imbalance of Ether always lies in the basis of Vata Dosha disorders.

Vayu — the second element, which appears in the Wheel of Creation, when Prana (animating principle) is immersed in matter. In popular interpretations of the five elements theory Vayu is translated as Air / Wind (interchangeable synonyms). Herewith they use a symbolic transfer of the characteristic, which wind has — the movement of matter.

Vayu governs the movement of all things in the universe — from subatomic particles to huge rotating galaxies. In our body, wherever there is a movement (nerve impulse, blood flow, muscle contraction, secretion of glands), the governing principle is Vayu.

From the physiological viewpoint, it is interesting to note that the principle / element of Air can be found not only in compliance with the dynamic physiological processes, but also in the literal terms. Thus, in recent years, more attention is paid to the gaseous molecules as an important signal factors. In particular, NO- — molecule of nitric oxide — is the most powerful regulator in the body of the tone of smooth muscles in the blood vessels, governing the process of their contraction (movement). As you know, Vata Dosha imbalance is often associated with a spasm of smooth muscles of internal organs.

So Akasha generates an electromagnetic field of space in which the potential difference appears and the impulse to the movement arises — the manifestation of Vayu. Thus, in particular, the formation of the nervous impulse occurs. Movement has a withering influence, therefor the main feature of Vayu is dryness, which leads to separation and disintegration.

Vayu imbalance leads to excessive dryness of the skin, soft tissues and joints. Since wind accelerates in a large space (a lot of Ether), it is accompanied by an excess of cold and high sensitivity to drafts, insufficient blood flow, bloating, constipation, fatigue, insomnia, spasms, loss of emotional flexibility, dry cough, etc.

Wind shortage leads to reducing of Prana level and stagnation, as well as to the symptoms characteristic of high Kapha level.

Agni Bhuta — literally it is Fire, the force that converts the substance into different states of aggregation. The third element that comes from Cosmic Mind.

The main attribute of Agni is a transformation (conversion). The main task — extracting energy from the dense matter with its subsequent involvement in the processes of growth and development.

Agni can manifest itself only in a space (Akasha), where there is a movement (Vayu). As a result of the matter motion its friction and heating with the light radiation occurs, so the basic qualities of Agni — heat and light.

In the human body Agni Bhuta has several forms of manifestation. The most obvious — the metabolic conversion of food (digestive fire). It is through Agni the body is able to extract Prana (energy) of the incoming food due to Pachaka Pitta.

On a more subtle level you can judge about the strength and weakness of Agni of the person by the light that comes from him. The quality of light is reflected on the skin shine and in the complexion. Healthy people emit the strength and energy. Patients almost nothing emit (Sunil Joshi, 2004).

Fire imbalance typically manifests itself as its excess, which is usually associated with fever in the body. Herewith the clinical symptoms are: increase of the body temperature, hyperacidity, skin redness, inflammation of the tissues, excessive sweating, irritability. These states are similar to the problems that arise at the excess of Pitta Dosha (Frank Ros, 2005).

Lack of Agni is manifested in the reduction of digestive fire, which creates problems with the assimilation of nutrients and accumulation of toxins in the body (ama).

Jala Bhuta — the fourth element, that consistently emerges from Cosmic Mind (Mahat). Its meaning is often translated by the word "water", but this is not the exact name. As with the other elements, the more complete picture we get from the governing principle of Jala — the cohesion (coupling) of corpuscular particles with each other, ie this is the physico-chemical coupling strength of electrons, atoms, molecules, forming dense matter. Another quality inherent in Jala — fluidity (the movement of delocalized electrons and other corpuscular particles), that's why it is associated with water.

It is through the fluidity of corpuscular particles in the liquid state Water under the impact of Vayu can transfer Prana in the body.

The main liquid environment of the body is Avalambaka Kapha, which is the basis for the flow of chemical reactions with the transformation of the substance into the forms that the body needs.

Excess of liquid is one of the reasons for Kapha Dosha imbalance. Clinically, it manifests by hypersecretion of mucus, cough with phlegm, swelling of glands, tumor of joints, edema of tissues.

Prithvi Bhuta literally means the element of Earth. The manifestation of the elements unfolds sequentially from the subtle and abstract to the dense and concrete. The essence of cosmic principle Prithvi Bhuta is a structure, manifested as a solidity. The structure is the corpuscular form of matter — electrons, atoms and molecules that create dense (physical) body.

Strengthening of this principle forms strong Kapha Dosha imbalance with the manifestation of its properties of gravity and static character.

Excess of Prithvi Bhuta is manifested as small coldness, occlusion of blood vessels, loss of flexibility, gravity and lack of fluidity. Symptoms include somnolence, loss of appetite, feeling of heaviness in the limbs and loss of their flexibility.

On the other hand, shortage of Prithvi Bhuta causes decreased muscle tone, leaching of calcium from the bones, feeling of weakness. In general, the body reduces its strength, it is similar to the state of high Vata Dosha level. 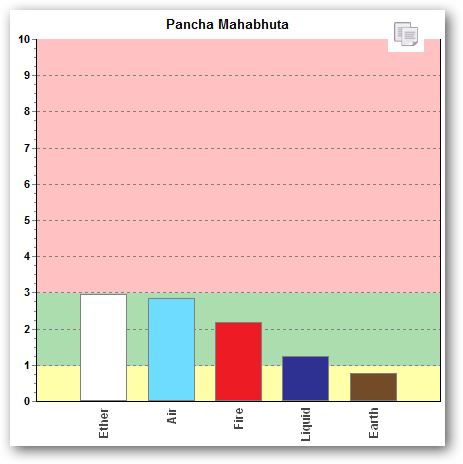 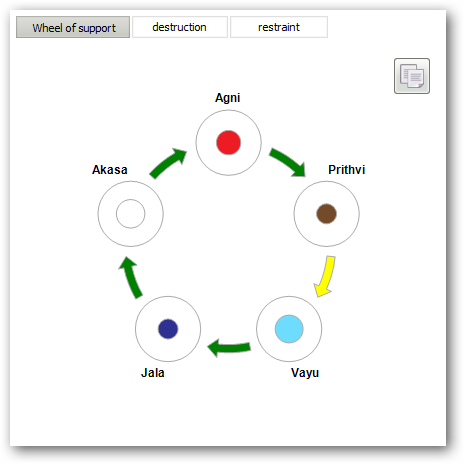 3. Fire — Liquid
Excess of Agni (red arrow) generating high level of Pitta, can eliminate Liquid from the body, overheating it and causing dehydration. This is similar to high fever and concomitant it strong thirst.
Shortage of Agni (yellow arrow) increases the symptoms of Kapha Dosha imbalance.

4. Liquid — Earth
Excess of Liquid (red arrow) can destroy Earth, reduce its stiffness and hardness, lead to fluid retention in the body (edema).
Lack of Liquid (yellow arrow) can enhance rigidity and immobility of Earth. 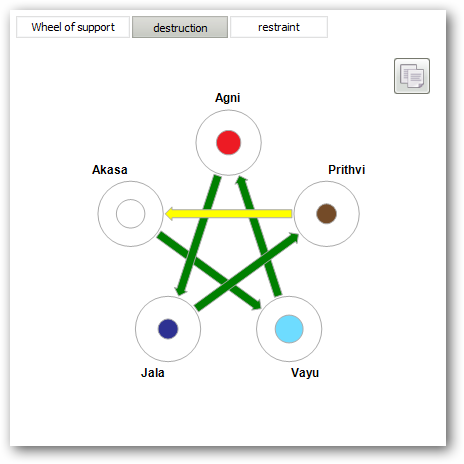 Each element is associated with doshas and bodies, and therefore restrained and balanced by other elements (Frank Ros, 2005). Restraint is something like a shock absorber or a brake of the elements activity, allowing not to lose the balance. If any element is not able to restrain the other element, the latter has a tendency to dysfunction in accordance with its characteristics.

For example, if Ether would not be able to restrain Earth, then it can lead to inflexibility, heaviness and retardation. These are features characteristic of Kapha Dosha imbalance.

The restraint function is extremely important. Without the proper containment each element would develop uncontrollably in accordance with its inherent features. 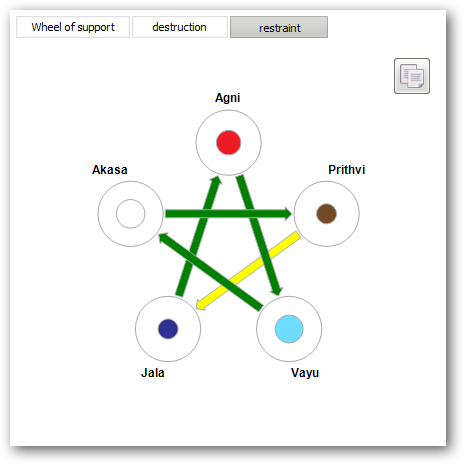