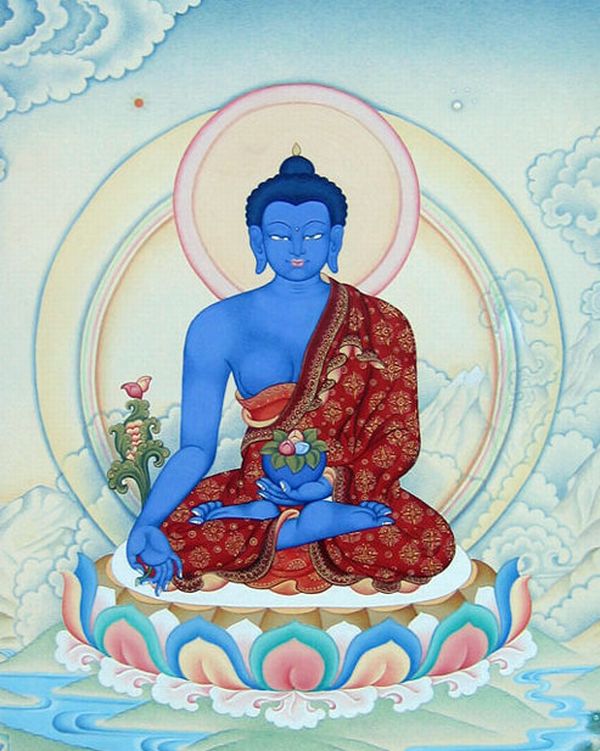 The doshas concept of the Indo-Tibetan Medicine is multifaceted and permeates the entire philosophy, but from the viewpoint of European mentality, their effects can be considered as biological regulatory mechanisms. Balance features of these regulatory systems define the body constitution and a current state of health. Besides, the dosha regulatory functions are related to the Twelve Meridians System used in reflexology. Each dosha governs the energy circulation in four Meridians.

The balance between the VPK and Meridians should be considered in the surveys analysis. The analysis should be made from the whole to details. First of all, it’s necessary to find out the value of the VPK imbalance (primary forces), and then to move on to clarifying how energy circulates in the Meridians.

As we said in the article ‘Therapeutic approach based on body type constitution’, the ideal condition is tridosha, when the VPK quantities are equal. When all three doshas are balanced, this indicates a harmonious state of the regulatory mechanisms balanced by physiological functions of organism.

Important to notice that because of individual features of the body constitution (predominance of one or two doshas) this often becomes an elusive goal. And current dosha imbalance should be continuously compensated by phyto, aroma and diet therapies and adjusted lifestyle. Anyway, the higher of a deviation from tridosha the more unbalanced energy and fear of growing diseases.
By assessing the level of energy in the Meridians, the program distinguishes 5 levels and represents them in colours.
The red means strong depletion (emptiness syndrome in Traditional Chinese Medicine),
the pink — slight depletion,
the green — normal,
the yellow — slight tension,
the dark yellow — strong tension (fullness syndrome in TCM).
By analyzing the Meridians first of all pay attention at ones with the strong tension (energy excess). It’s most important if the tense meridian relates to the tense dosha. This should be considered as a double indication to the seriousness of the problem.

And if the tense meridian relates to dosha without tension, this indicates the initial phase of dosha imbalance. If tension appeares in one of the meridians, it means that in time the imbalance will appear in the whole dosha and not only in the one particular meridian.

It means the presence of Vata imbalance in both cases. The difference is: in the first case it is very significant with a high probability to functional disorder. And in the second case there is a first stage of the energy imbalance, which corresponds or precedes the beginning of a functional disorder without obvious morphological changes.

The examples of two these surveys are available in the VedaPulse software and in Demo Version of the VedaPulse (http://vedapulse.com/support/). They are named Example-3 and Example-4 respectively. 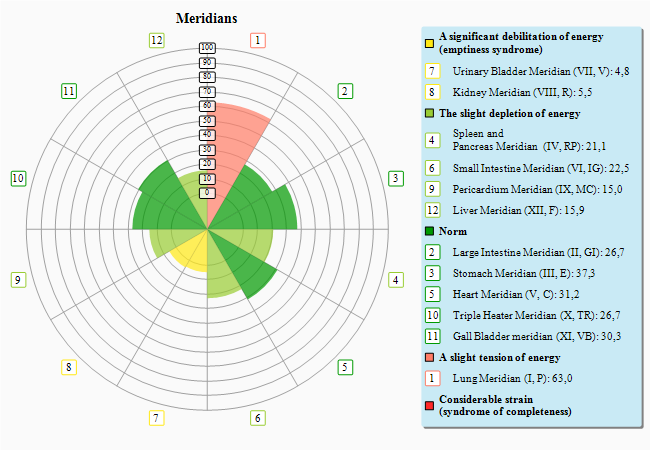 Example-3 is the explicit Vata-dosha imbalance.

Example-4 is tridosha, but the strong tension has already appeared in the Lung Meridian (I, P). If it won’t be corrected, it’ll be the Vata-dosha imbalance in the future. 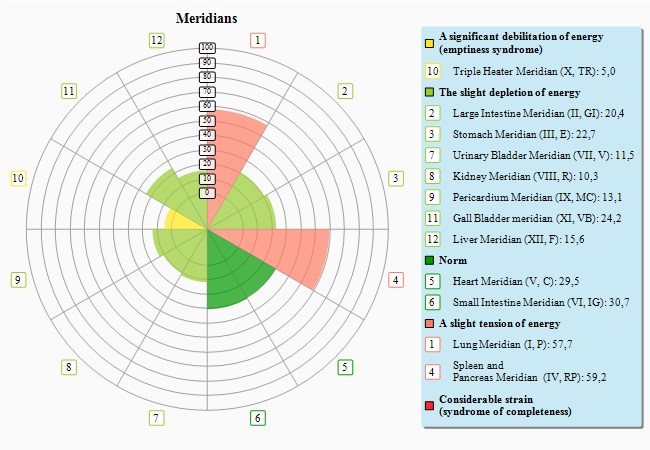 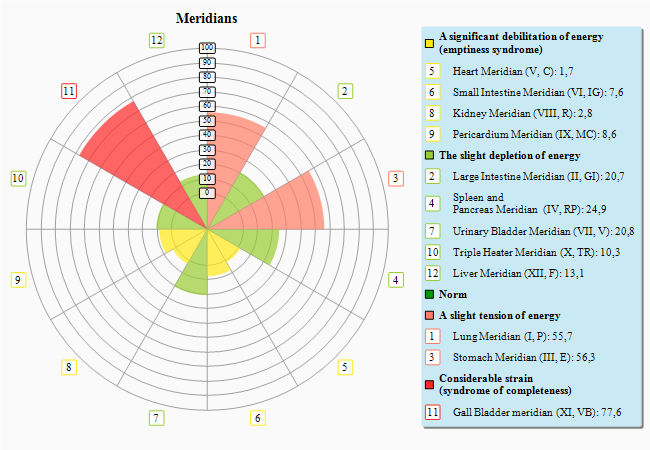 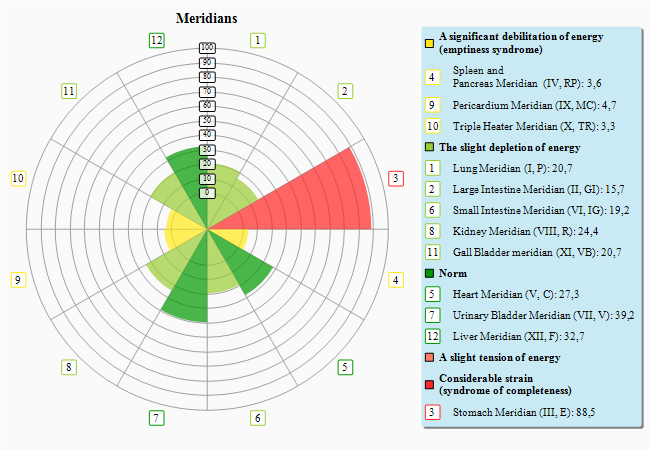 Example-2. Kapha-dosha imbalance and tension in the Stomach Meridian (III, E).
This channel is one of the four meridians, which is connected with Kapha-dosha. By the way, the clinical survey of this patient revealed the beginning of ulceration. In this case remarkable to notice that there were no painful symptoms. Thus, the VedaPulse rapid diagnosis and the subsequent timely visit to the gastroenterologist revealed the disease on the early stage, when the patient had no idea if he had a serious illness. 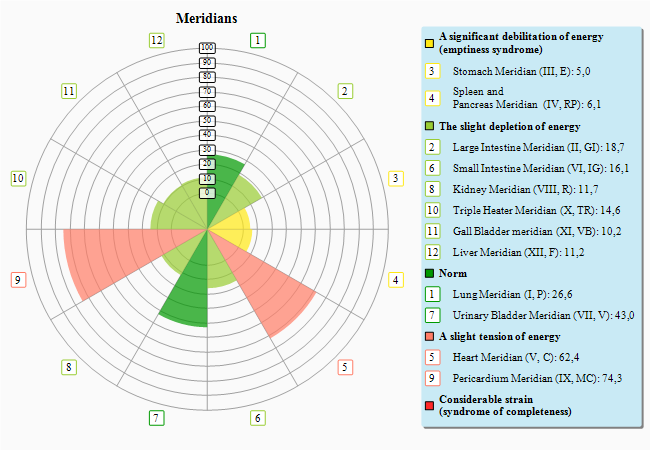 Example-5. Kapha and Vata imbalances. This is a very representative variant. This is the combination of stagnation in the energy circulation (Kapha imbalance) and the great nervous tension (Vata imbalance) with weak metabolic processes (small value of Pitta). This combination is rather difficult for rehabilitation. Even with the strict implementation of all recommendations which the VedaPulse automatically generates in tabs ‘Lifestyle’, ‘Herbs’, ‘Aroma’, ‘Diet’, an expectation results of therapy lasts very long. By the way, pay attention that in three meridians (Heart Meridian (V, C), Urinary Bladder Meridian (VII, V), Pericardium Meridian (IX, MC)) is observed high tension. Energy circulates only in these three meridians among twelve, the rest meridians are blocked. Each of these blocked meridians is related with one of three dosha. So, we can state the imbalance in all three dosha! As Russians say, ‘a full bouquet of problems’.

When analyzing is necessary to consider the duality of the meridian channels. As a rule, the energy changes in one meridian are reflected in its paired channel. Reflexotherapists know this fact very well. For example, the paired channel of the Lung Meridian (I, P) is the Large Intestine Meridian (II, GI) and the paired channel of the Heart Meridian (V, C) is the Small Intestine Meridian (VI, IG).
Except the connection of paired channels there is a regularity in energy circulation between channels, which relate to another dosha. This energy circulation depends on the circadian rhythm. Ideally, fluctuations of energy, recorded by the device at different times of the day, have to be within the normal range (small tension and negligible depletion are permissible).

According to Ayurveda, first of all the attention is paid to the excess dosha and its decrease.

The VedaPulse software automatically cflculates the value of dosha imbalance and features of the energy circulation in the meridians. The recommendations in the tabs: ‘Lifestyle’, ‘Herbs’, ‘Aroma’en Diet’ are formed on the basis of these data.
The central idea of this approach is in awareness of the fact, that the base of any disease is dosha imbalance and a tension or blocking energy circulation in meridians. In addition to this, there is a possibility to choose the disease of a concrete patient in the special menu and to adjust the recommendations. Those therapies that will be recommended for selected diseases will be allocated in bold.
Remember, the examples, discussed in the article, are available in the VedaPulse software and in the VedaPulse Demo Version.