The Quantum Physiotherapy is designed for professionals working in the field of traditional (complementary, integrative) medicine. It allows creating individual physio therapeutic recommendations for the quantum treatment based on the VedaPulse assessment.

Quantum therapy is based on the use of electromagnetic fields, quantum processes and wave information properties of living matter for therapeutic and preventive purposes. In quantum therapy there is a simultaneous effect of several physical factors of a quantum nature that have a synergistic effect on each other.

The method is successfully applied in such areas as cardiology, pediatrics, urology, gastroenterology, dermatology, nephrology, phthisiology, cosmetology, etc. Devices of multifactorial quantum therapy is used both for prophylaxis and immune support, as well as for acute respiratory diseases, healing of wounds and burns, the procedure of quantum therapy is highly effective for diseases of joints and spine, vascular diseases, diseases of the gastrointestinal tract, obesity and many other diseases. 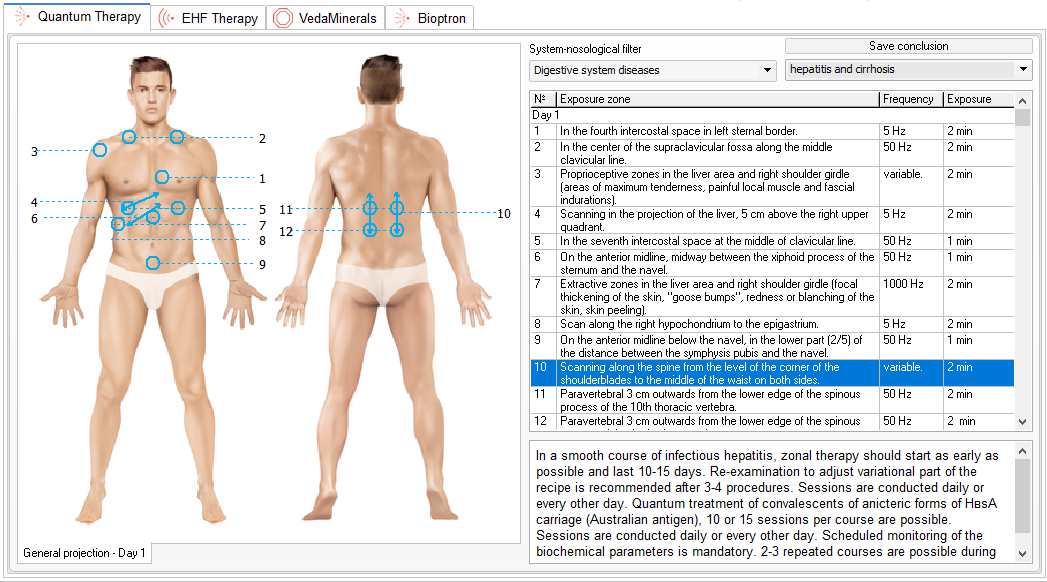 Quantum therapy devices are multifactorial. The impact is made by several types of electromagnetic and light radiation. The most commonly used combination of the following physical factors:

The Quantum Physiotherapy module expands capabilities of practicing specialists, who have already been using physiotherapy, and at the same time it would become an easy way to adopt the methods of physiotherapy for those who only plan to introduce it into their practice.

The module allows to practice the personalized approach in physiotherapy. Operation with Quantum Physiotherapy module is basing on a specific nosology (140 diseases, divided into 17 nosological groups), the current functional state and psychophysiological constitution of the person.

Instead of a trite mechanistic approach, we offer a personalized solution that takes into account the individual characteristics of the patient. The module includes a detailed Atlas of treatment zones, simplifying the adoption of this method.

The work begins with a five-minute assessment on VedaPulse Professional. After that, the program automatically creates a prescription for physiotherapy.

The physiotherapy recipe created by the program describes the location of the zones, the frequency of oscillations and the time of exposure. The recipe is provided with an interactive image of a human body with the treatment zones indicated on it. When you hover the cursor over the selected area, a description of its location and method of influence appears in the recipe. The recipe created in the program can be saved in RTF format and transferred to the patient. In the process of creation of algorithm of Physiotherapy-Quantum therapy expert module, the rules of formation of physiotherapy and acupuncture recipes were taken into account, as well as the constitutional approach of Ayurvedic medicine.

Who the Physio Therapy-Quantum therapy module is designed for

The Quantum Physiotherapy module is useful for both - specialists practicing physiotherapy and reflexology, and people leading a healthy lifestyle but not having the skills of working with physiotherapy devices. Quantum therapy is also useful for:

Would you like to get a special offer on a purchase of the module or receive it for a trial?
Feel free to contact us!