Biorhythms software module is the next step. It allows synchronizing the internal and external biorhythms of a patient. It balances basic functional systems of the body (cardiovascular, digestive, respiratory, etc.) according to natural rhythms. It strengthens the immune system and increases stress resistance. Consumption of adaptation resources during the process of treatment significantly reduces.

Previously released module called Acupuncture introduced an algorithm, which combined symptomatic treatment for specific diseases and correction of the patient’s energy in meridians as a result of assessment on the VedaPulse Professional device .

Combination of the Traditional Chinese Medicine (TCM) and Ayurveda algorithms is the unique feature of the Biorhythms module.

"Biorhythmic points by TCM" recipe is created on the basis of the classic concepts "Zi Wu Liu Zhu” and “Ling Gui Ba Fa", which take into account individual energy of a person and the energy of the current day.

"Biorhythmic points by Ayurveda" recipe is created on the basis of the circadian cycle of the human body activity and current functional state (pulse of the organs).

The work with this module starts with a standard assessment, a five-minute recording of the heart rhythm. Specify the patient’s date of birth to calculate biorhythms. Otherwise, the point of Power of the birthday will not be detected.

Algorithms for using this module.

Open the "Description of the day" tab after the assessment is done. The box corresponding to the current 60-hour cycle will be marked in the left column. Two recipes of high priority will appear in the upper window. The uppermost recipe includes Biorhythmic points of the TCM, and the lower one - Biorhythmic points of Ayurveda.

By clicking on any point in these recipes you will be able to see its description to evaluate its importance for this patient. Relevance of this point can be evaluated by knowing the symptoms of the patient and the results of Meridians evaluation (pulse of the organs), another software module.

You can additionally give consideration to the crossing point of the TCM and Ayurveda algorithms. Four time intervals and associated channels are highlighted with color. They correspond to the dominant dosha. One of four time periods is highlighted in dark pink color and is associated with the channel of dominant dosha with maximum imbalance. Point with the maximum activity and resonating energy in the current day will be highlighted in the table "Wu-Xing points".

Use recommended points to enhance the effect of reflexology treatment. Open the “Calendar” tab and select the day, when the patient can visit you, and study the biorhythmic points of this day in the “Description of the day” tab.

There is one more scenario. You can open the “Wu Xing points” tab and choose a point, which relates to the imbalanced Meridian. The nearest day of the activity of this point in a 60-day cycle will be calculated automatically. Next, click on “Description of the day” tab to choose the best time for the patient’s next visit. 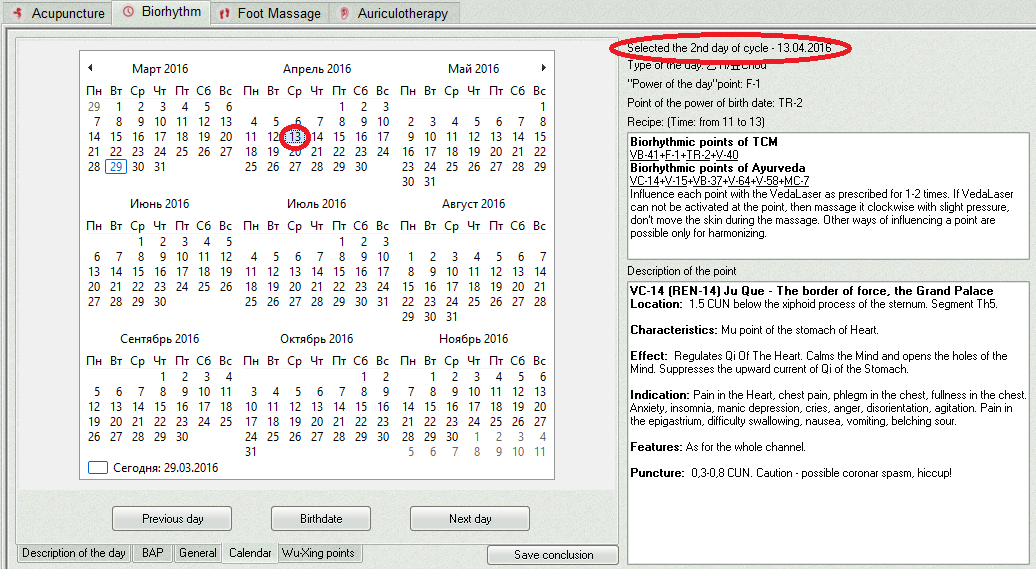 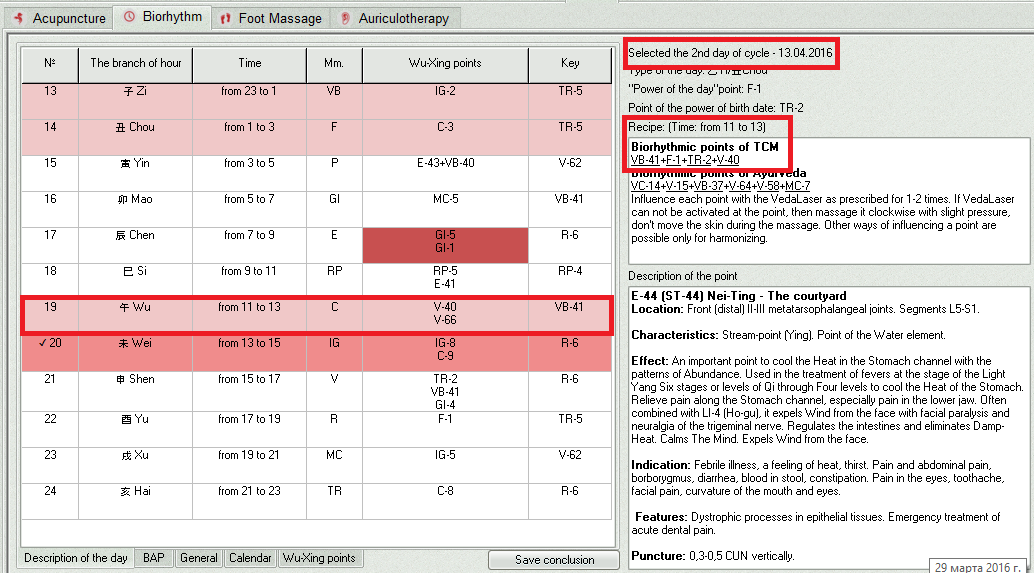 For advanced users who are familiar with the energy of each day in a 60-day cycle: There is a tab called “General”, where you should click on the symbol of the day of the cycle to see the required date in the right part of the screen. Appoint the procedure for this day and select the required recipe.

It is also recommended to alternate the biorhythmic effect and usage of recipes from the TCM (Reflexology/Acupuncture) module to restore the balance of meridians.

Who will benefit from using this module?

Would you like to get a special offer on a purchase of the module or receive it for a trial?
Feel free to contact us!