This extension is designed to create a personified program for the work with the patient’s specific biologically active points using various Rakta Moksha procedures (including classic hirudotherapy). The prescription is generated automatically after a 5-minute assessment on the VedaPulse device 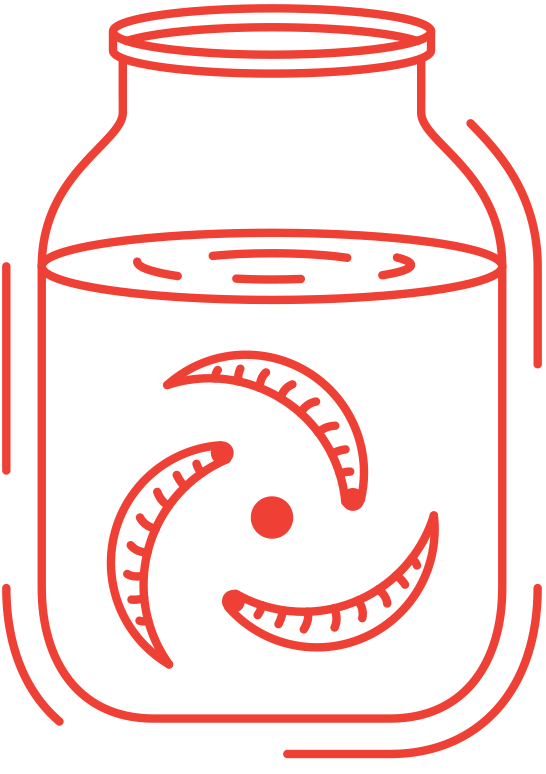 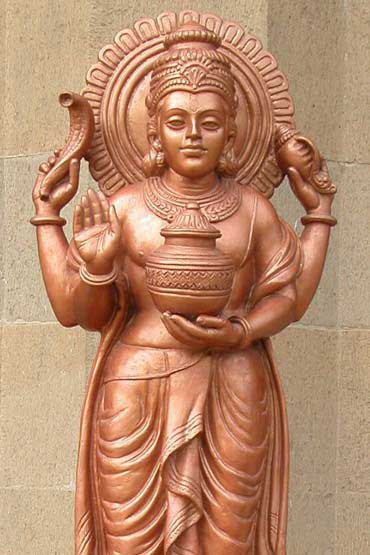 Blood (Rakta), as a substance in Traditional Chinese Medicine and Ayurveda, is one of the most important tissues in human body. It is a binding beginning in the process of pathogenesis (Samprapti) and distribution of Doshas from the places of their localization to the areas of their pathological accumulation, which cause diseases (Rakta Roga) according to the theory of the traditional healing systems. A lot of TCM syndromes (Blood stagnation syndrome, Blood Emptiness syndrome) are based on the mechanisms related to qualitative and quantitative changes in the rheological and biophysical characteristics of the blood circulation in the vessels. There are several classes of the herbs in TCM and Ayurveda that expel (clean) the Heat, cool the Blood, move the Blood and removing the Stagnation, restore (add) the Blood. Their aim is to influence the Blood system.

However, one of the most effective ways to "release the blood" (which means "Rakta Moksha" in Sanskrit) is hirudotherapy. Even Dhanvantari, the patron of all healers and doctors in Ayurvedic literature, holds a leech in his hand as sign of the importance of such procedure in the system of rehabilitation activities.

According to the traditional literature on Ayurvedic medicine Sushruta and Vibhuti (Sushruta Samhita, Sutra Sthana, chapter 14; Astanga Hrudaya, Sutra Sthana, chapters 26-27) consider "Rakta Moksha" (and hirudotherapy as its part) a fifth method of Panchakarma (Pancha means “five”, Karma – “effect”). Panchakarma is a system for deep body purification through five effects that must be applied by a doctor to remove the pathological substances that cause disease – imbalanced Doshas (balancing the regulation systems), altered Agni Dhatu (restore the metabolism in the body tissues), body wastes – Mala, and metabolic toxins, endotoxins called Ama. Rakta Moksha is aimed at removing unhealthy blood carrying pathological substances. There are other methods for the treatment of Rakta Dhatu (blood system) besides Rakta Moksha. They are Virechana – therapeutic loosening/colon cleansing; healing fasting along with tonic herbs administration; Annavijnana – constitutional healing diet. 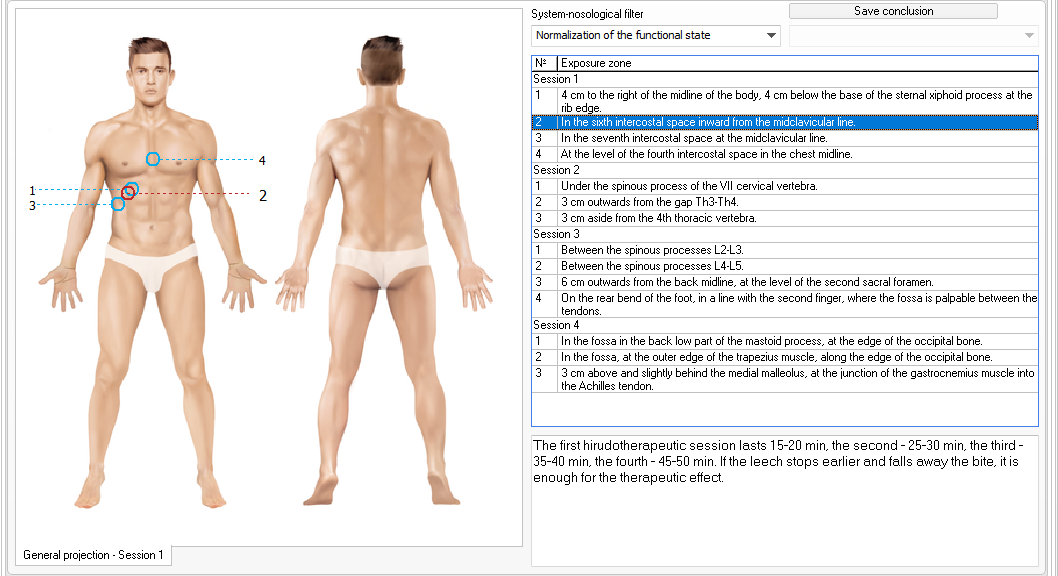 It is believed to be the least painful and complicated way of bloodletting, suitable for Western people, who got used to comfort (Sushruta Samhita, Sutra Sthana, chapter 13, verse 1). Leeches are famous for their "sweetness" (hirudin secretion, which they release into the body through the bite) and the cooling property, which is why bloodletting with leeches is recommended during Pitta Dosha diseases or the Yang excess syndromes.

Interactive atlas makes it easier to search for the necessary points. Detailed description of the effects allows the beginner specialist to avoid mistakes and conduct a highly professional healing session.

Prescription from the "Hirudotherapy" extension has a complex structure and includes the following elements:

1. The core of the prescription, which is generated according to the classic approaches of Rakta Moksha/hirudotherapy. This part of the prescription is universal for people with different constitutional types and determines the general biological trends in influencing the pathogenesis of a particular disease.

2. Variable component of the prescription is associated with the human constitution. There are nine basic constitutional types in traditional medicine and one harmonized type. Every type of body constitution has genetic predisposition for distinctive pathological ailments. The algorithm of the extension includes Vikruti (current constitution of a person, as a degree of its deviation from the inborn constitution - Prakruti) and customizes the prescription for each patient with consideration of the Doshas balance, Yin and Yang balance, Prana/Qi level.

3. Variable component of the prescription is associated with the current energy level of the basic meridians (functional body systems). The algorithm of the extension includes the balance of meridional energy (according to TCM), or, in other words, the state of regulation systems. Additionally, it individualizes the prescription with regard to the patterns of Excess (Fullness syndrome) or Deficiency (Emptiness syndromes).

"Hirudotherapy" extension will be useful for specialists practicing traditional medicine and hirudotherapeutic approaches for the work with biologically active points:

For a Health Consultant